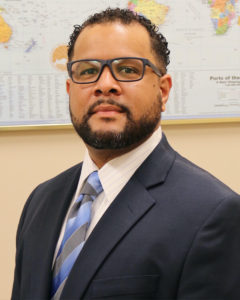 Therrance Chretien has been named director of cargo and trade development at the Port of Lake Charles.
The appointment was announced by Richert Self, port director, at this week’s meeting of the Lake Charles Harbor and Terminal District’s board of commissioners.
Chretien previously served as deputy director of operations.
He began at the Port as a student worker during his freshman year in high school — painting offices and facilities, sweeping warehouses and washing pallets every summer through college.
He was awarded the Port Maritime Enhancement Scholarship in 1997 and became the program’s first recipient to a earn college degree, graduating with honors from McNeese State University in 2002 in marketing.
Chretien joined the Lake Charles Harbor and Terminal District staff in 2002 as a trades apprentice. The following year, he was named marketing representative.
In 2007, Chretien was placed in charge of agriculture cargo, responsible for soliciting agriculture commodities for import and export. The Port emerged as one of the top U.S. breakbulk export ports for the US Agency for International Development (USAID) Food for Peace program.
Chretien was promoted to marketing manager and the Port’s cargo base expanded to generalized cargoes such as forest products.
In 2010, he was promoted to automated terminals manager. As a member of the Operations Department, he began managing the processes of port operations — and, 2014-15, he also worked in the Navigation Department, assisting the navigation director in working with the U.S. Army Corps of Engineers and other agencies on Calcasieu River Ship Channel dredging and navigation matters.
He was named deputy director of operations last year.
By portoflcdev|2020-08-03T09:42:05-05:00August 2nd, 2020|2020|0 Comments