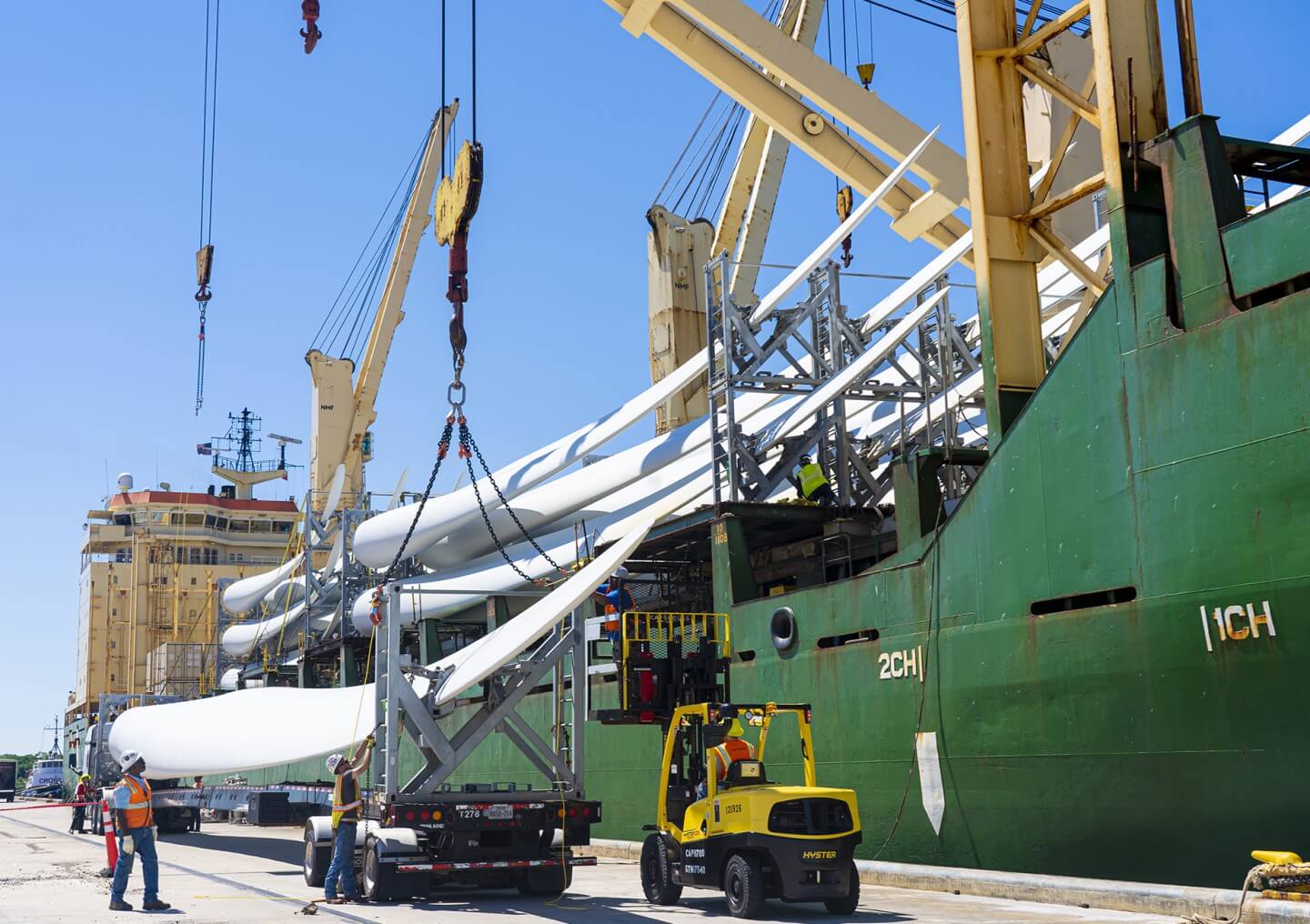 LAKE CHARLES, Louisiana — Seeking to expand its role in handling power-generating wind turbine components, the Port of Lake Charles is exploring the creation of an offshore wind port terminal.

Land parcels at the Port’s Industrial Canal are being considered as sites for the facility.

The Port has already handled some 1,500 giant wind-turbine blades — many of which are 200 feet long — at its City Docks facility. The new terminal would be a second, larger site to handle even larger blades and other windmill components.

The Port’s new leadership team, headed by Executive Director Richert L. Self, has hired the Moffatt & Nichol consulting firm to conduct a feasibility study about the idea.

The effort reflects the Port’s interest in opportunities to develop a facility to support the Gulf Coast offshore wind market.

“The Port is located in close proximity to the strong offshore wind resource located off the coast of Texas and western Louisiana,” the consultant’s report noted. “Sites at the Industrial Canal may become available to support the offshore wind industry as a marshaling (or) staging facility, and/or an offshore wind component factory.”

The potential Industrial Canal sites are about 60 acres of waterfront property along the canal, currently subleased through Trunkline LNG, and 30 acres of undeveloped property across Highway 384/Big Lake Road, currently leased to the Shaw Group but potentially available for the project.

“New, larger blades require larger laydown areas with high-capacity dock strength to support the cranes that handle the components,” said Nick Pestello, director of engineering, maintenance and development. “The Industrial Canal area offers an ideal site because of the close proximity to the most promising locations for offshore wind in the Gulf, along with a deep-draft channel and no height restrictions.”

The study will analyze the feasibility of two types of offshore-wind port facilities:

“Fully assembled offshore wind components are too large to be transported on rail or road,” the consultants noted. “The components are therefore moved from location to location via waterborne transport. The fabrication facilities do require smaller pieces and raw materials to produce the components, and these can be delivered to the site via rail and/or road.”

With these factors in mind, Moffatt & Nichol is generating criteria for a fixed-foundation marshaling/staging facility and a waterfront offshore wind component fabrication facility.

The criteria may include:

The criteria will be compared to the assets of each site. A gap analysis will be done to identify the rehabilitation, buildout and retrofits needed.

A multiple use, or co‐location, scenario also will be considered.

“The hub scenario can create significant logistics efficiencies,” the consultants noted. “Components can be manufactured and loaded out in adjacent facilities — and therefore, priority will be given to developing a hub at one site.”

The Port of Lake Charles — officially, the Lake Charles Harbor and Terminal District — is the nation’s 11th-busiest port district in terms of annual cargo tonnage, according to U.S. Army Corps of Engineers statistics. The Port is marking its 95th anniversary this year.